Most of us, the ones passionate about the personal development are aware of the important things which weren’t taught in schools when we attended them. Mindvalley published the results of a recent survey containing the opinions of 20,000 of its customers. The results speak for themselves. The information from this infographic also shows market opportunities for trainers, teachers and mentors. Enjoy! END_OF_DOCUMENT_TOKEN_TO_BE_REPLACED

Social Media is a tool. It makes it easier to communicate and engage with a large number of people across a very wide geographic area. Social Media is not the goal.

Now that’s actually really important so let me say it again, ‘Social Media is NOT the goal!” Having 50,000 Facebook Fans means squat if none of them visit your site or buy your product. Businesses operate to make money, not friends. That’s why real social media success can only come once you leave social media behind and enter the world of IRL.

Social media IRL, as the kids say, simply means ‘In Real Life’ or ‘offline’ or, more appropriate for the marketing world, ‘where things get bought’. Businesses use social media to engage with other brands or clients, to research buying decisions, to ask questions, to watch videos of cats and to meet new people. What they don’t do is hand over money for goods and services. Why? Because they can’t. Outside of being able to buy more cows for your Farmville, there simply isn’t the functionality to make large B2B purchases via social media. This is almost guaranteed to change over the coming years but for now, the purchase always takes place on a company website, by phone or in person – IRL.
END_OF_DOCUMENT_TOKEN_TO_BE_REPLACED 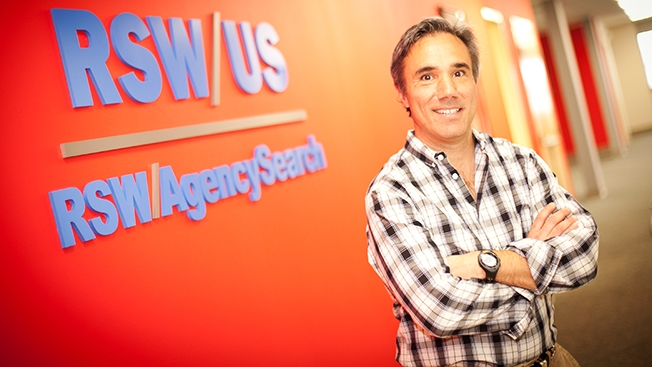 When hunting for new business, agency leaders have embraced the use of social media platforms, but only the most established hubs.

In a new poll from RSW/US—shared exclusively with Adweek—46 percent of 300 agency honchos described LinkedIn as the “most important” social media vehicle for generating new business leads, well above blogging (24 percent), Facebook and Twitter (both at 14 percent) and Google (just 2 percent). The same poll, though, found that only 21 percent use SlideShare to market their agencies to prospective clients.

Interestingly, SlideShare has been around nearly as long as LinkedIn—seven years compared to 10. So, both are ancient in the realm of social media, but obviously LinkedIn is a bigger name in b-to-b networking.

Also, LinkedIn “requires the least amount of effort to maintain and use effectively,” Sneider said. “All I have to do is to invite somebody into my network and now I have a network.”

Podcasting goes back even further than LinkedIn or SlideShare but like SlideShare, is seldom used in marketer prospecting. More than three-quarters of the poll respondents don’t use podcasts—or blogs, for that matter—to connect with prospects. Why? Because, like Twitter, these tactics are time- and labor-intensive. END_OF_DOCUMENT_TOKEN_TO_BE_REPLACED

As I am passionate about personal development applying a lot of meditation techniques, coaching and training into my life to see how they benefit myself, those around me and … the whole world I often ask myself why I do what I do and also. After I have some answers I ask myself why other people do what they do? And sometimes the answers are astonishing. It seems that there are some invisible forces cotrolling us from within. The truth is that we can make anything happen and we can have it all. Coach Tony explains briefly what the internal … END_OF_DOCUMENT_TOKEN_TO_BE_REPLACED

Here are 9 dirty truths about becoming an entrepreneur, and yes, the author added a 10th to make it even sweeter. Check the article here and start or continue your dream today! 1. The business you start with won’t be the one you end up with. 2. You will want to quit 3. Your family and friends won’t get it 4. There’s no such thing as an overnight success 5. Your number of Twitter followers doesn’t count 6. No one owes you a paycheque 7. It’s not all cocktail parties and CEO moments. 8. Your dream life does not come … END_OF_DOCUMENT_TOKEN_TO_BE_REPLACED

Anthony Robbins is one of the voices I hear on a daily basis, even in the car and I have to admit that I’ve learned a lot from him in the last two years. One of the things which can make or break us is power of our own beliefs. Coach Tony has a very simple and coprehensive definition of belief: “What is a belief? It’s a feeling of certainty about what something means. The challenge is that most of our beliefs are generalizations about our past, based on our interpretations of painful and pleasurable experiences. The challenge is, most … END_OF_DOCUMENT_TOKEN_TO_BE_REPLACED

Richard Branson is for sure one of my role model when it comes to business and how he communicate about what he is doing. Recently, Richard published an article about the lessons any business owner can learn from sporting success. The main keywords of the article are: 1. Teamwork is paramount 2. Mentorship matters 3. Be resilient and determined 4. Have pride and purpose 5. Delegate wherever possible Enjoy the full article here. END_OF_DOCUMENT_TOKEN_TO_BE_REPLACED

Here I attach today two infographics showing in a simplified way How To Build Wealth. Building Wealth means to have systems and all the real rich people I know use them. There is no other way than deciding and start doing today and improving by doing. Have an amazing day! END_OF_DOCUMENT_TOKEN_TO_BE_REPLACED

I think that at least once every day I can find a reason to give up but in the same time I find other 10 to walk this path and grow myself in this direction. This infographic explain what is all about. Enjoy! END_OF_DOCUMENT_TOKEN_TO_BE_REPLACED

For me the MBA is just an investment in the personal growth and not a vehicle to get a better job. That’s why I’ve chosen to develop myself as an entrepreneur and to make things happen, no matter what than to wait for things to happen. I just found an article “MBA Recruiting Is Down Again” MBA recruiting deteriorated this spring largely because of declines at top-ranked schools, with nearly half of all business schools surveyed reporting that on-campus hiring activity was little changed or had decreased, according to new research. The survey of 84 business schools conducted in late … END_OF_DOCUMENT_TOKEN_TO_BE_REPLACED

I just came across the new list of the self-made women billionaires published by Forbes and I’ve noticed that many of them come from China and their fortunes are related to real estate and construction. Oprah (one of my favourite TV stars) is among them. It is  a record-setting year for women on the Forbes Billionaires list. For starters, there were more than ever, 138 in the ranks, up from 104. Plus there were also more who started their own businesses, 24. Among the new women are designer Tory Burch and restaurateur Peggy Cherng, who runs Chinese food chain Panda … END_OF_DOCUMENT_TOKEN_TO_BE_REPLACED

Recently I came across a great infographic about what happens every 60 seconds on the internet. The figures are simply amazing and I will let you enjoy them! END_OF_DOCUMENT_TOKEN_TO_BE_REPLACED