Tinchy Stryder will be one of the artists which will put on fire the scene on the 18th of June at Manx Telecom Bay Festival 2011. More details about the festival and tickets here. 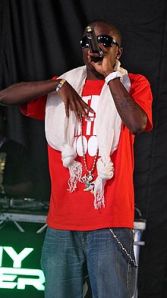 Kwasi Danquah (born 14 September 1986), better known by his stage name Tinchy Stryder, is a British rapper.
He rose to popularity with the song “Take Me Back” which peaked at Number 3 on the UK Singles Chart in January 2009. He then released the aptly named song “Number 1”, (a collaboration with N-Dubz) which entered the UK chart at Number 1 on 26 April 2009. Stryder lately released “Never Leave You” with Amelle Berrabah from girl-group Sugababes which became Stryder’s second number 1.

Stryder started at the age of 14 on pirate radio sets in East London with other well known grime MCs such as Wiley and Dizzee Rascal. His stage name derives from the arcade game Strider which he played when he was young and from the nickname “Tinchy” given to him due to his short stature: his height at 5’1″ (1.55m) making him the shortest male artist ever to top the UK Top 40. Stryder made a number of appearances on Sky’s Channel U and BBC Radio 1Xtra taking part in freestyles, sometimes joined by his crew Ruff Sqwad. He was also part of a line-up at The O2 arena 3D ELEKTRO race that included Caspa and Rusko, Frankmusik, High Contrast and Dancing Robot Music. Stryder was part of well-known grime crew Roll Deep for a while, featuring on some songs including “U Were Always”, which was released years later on Roll Deep’s compilations album, Street Anthems.

The debut album by Stryder, Star in the Hood, was released on 13 August 2007 on Takeover Entertainment. The album spawned two main singles, “Breakaway” and “Something about your Smile”. Bonus track “Mainstream Money” was also released as an underground single.
Since 2006, Stryder’s career has been managed by Takeover Entertainment, comprising Archie Lamb and Jack Foster. Archie Lamb’s father is Liberal Democrat MP, Norman Lamb, who has invested in Stryder’s career.

Stryder began a significant partnership with producer/songwriter Fraser T Smith whom he originally contacted through MySpace and then met while supporting Kano on tour. According to Smith in an interview with HitQuarters, “Tinchy had no shortage of beats and cool sounding production, but I think he wanted to try and break through into the mainstream, and I had some experience crossing urban over into pop having worked with artists like Kano and Craig David.” On 11 September 2008, it was revealed that Stryder would be featured on Craig David’s new single “Where’s Your Love” which was produced by Smith and released on the 10 November 2008. He also appeared on the track “Princes” from the album Saint Dymphna by Gang Gang Dance.

His next single, called “Stryderman” was released and became his first single to chart in the UK Singles Chart, peaking at number 73. The song was the first single taken from his second, Fraser T Smith-produced studio album Catch 22. The second single, “Take Me Back”, featuring Taio Cruz, (released on 19 January 2009) was a popular hit following numerous plays on Radio 1, Kiss FM and many other TV and radio stations. On 18 January, the song entered the official UK Singles Chart at 39 on downloads alone, one day before its official release. The following week the single moved up 36 places to peak position 3.

On 26 April 2009, Stryder’s next single, a collaboration with N-Dubz (whom he had toured with on their recent Uncle B tour), titled “Number 1” topped the UK Singles Chart giving Stryder and N-Dubz their first number one single. In an interview with Tim Westwood, Stryder stated that due to the success of “Number 1” not going away yet, he had to push the album and a few things back to August 2009. Stryder’s fourth single from Catch 22, titled “Never Leave You”, featuring Amelle Berrabah of the Sugababes, was released on 3 August 2009 with the album following on 17 August. “Never Leave You” went straight to Number 1 on the week of its release. Catch 22 debuted at Number 2 on the UK albums chart, only beaten by Calvin Harris. The fifth single from Catch 22 is “You’re Not Alone” which was released in November 2009 and samples the Olive song of the same name.

Stryder’s 6th single from the album will be “Spotlight”, which also features vocals from Tanya Lacey.
Prior to the release of Catch 22, Stryder released two free mixtapes – Star In The Hood EP Volume 1 and Star In The Hood EP Volume 2.
He took part in a cover track of The Killers’ “All These Things That I’ve Done”, which was named I Got Soul, along with many other acts including Chipmunk, N-Dubz and Pixie Lott, to raise money for War Child charity, which helps young people who have been forced to fight in wars. The single was released on 19 October 2009 and peaked at number 10 in the Official UK Charts and 19 in the Irish Singles Chart.

As part of Stryder’s headline tour with Example and JME in February 2010, he paid respects to his Norfolk promoters Takeover Entertainment at a sell-out gig at Norwich’s UEA. Stryder opened on the pyramid stage at Glastonbury Festival on Saturday 27 June 2010.

Stryder’s third album, Third Strike was released on November 15, 2010. Roc Nation had signed Stryders’s management company, TakeOver Entertainment and the new leg of the company will be called Takeover Roc Nation. It will release records with Sony Music and tickets with Live Nation.