Today I found a very interesting article about 4 major reasons to market online:

Here are 4 major reasons why the Internet should be a significant part of your overall marketing strategy:

According to a comScore research report, the number of people actually searching for products and services online increased by 21% in 2008. So the Internet is a growing trend and more and more of your prospects and customers likely to look for you
online.

It’s convenient and a great way for them to save time and often save money too. Remember that a lot of people are time-poor in today’s hectic 24/7 society. Having more people searching for your product and service is one thing. The important question is: are they spending more money online? A comScore study reported that US e-commerce spending in 2008 reached a staggering $214.4 billion – a 7% increase over the previous year. So importantly, more people are spending more money online too – they’re not just lookie-loos and information seekers. They’ve got cash to spend and they’re going to spend it online
somewhere the only question is: will it be with you or your competitors? And the most popular search engine?
As you can see in the following pie chart, Google is the most popular and significant search engine – by far. The comScore study in February 2009 revealed that the top 5 search engines were Google, Yahoo!, Microsoft, Ask and AOL. Google gets 63.3% – nearly two thirds – of all searches in the US. Yahoo! gets 20.6% of the searchers – just over a fifth with Microsoft, Ask and AOL scrambling for most of the scraps. To get the most exposure, focus your efforts on Google and then Yahoo! if you have the resources.

Reason # 2: If You Don’t, Your Competitors Get the Profits
Chances are good that your competitors have already realized the benefits of marketing their business online. So if you don’t have a significant online presence then you’re losing out on the Internet visitors and they will go to your competitors
instead – together with their money now and most likely into the future too. Fortunately, most businesses that are marketing themselves on the Internet are doing a mediocre job at best and can usually be easily beaten online – with some correctly
applied expertise. 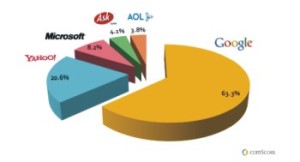 Reason # 3: Online = Greater Return on Investment
As marketing budgets come under more pressure, businesses are now looking for methods that have a proven return-on-investment (ROI) so that they can get more bang from their marketing bucks. Because of this, a lot of businesses are using online marketing methods such as e-mail marketing and search engine marketing which are proven to outperform traditional media such as advertising. But where should you spend your marketing dollars online? Well, a Sapient survey in 2007 found that 38% of online marketers ranked online search as their #1 marketing channel for providing ROI with e-mail marketing second
at 24% and digital advertising at 15%. According to a study by the Direct Marketing Association, the ROI from email
marketing in 2008 was $45.06 for every dollar spend whilst direct offline marketing had an ROI of just $15.55 for ever dollar invested. (Source: The Power of Direct Marketing Economic Study 2008 by the Direct Marketing Association).
In yet another study by McKinsey of 340 senior marketing executives in June 2008, they found that 91% were using online advertising and over half said that they plan to maintain or increase their current online spend. More importantly, 55% said that they are cutting expenditure on traditional media to be able to increase their online efforts. So, the trend is for savvy businesses to shift their marketing dollars from traditional offline methods such as advertising to online methods that have greater ROI.
If your current marketing methods are not producing the results you want, then we can help you to get a much higher ROI from every penny of your marketing budget by helping you to use online methods with a proven and greater ROI.

Reason # 4: Online Marketing Influences Offline Sales
One of the key things to understand is that people’s buying behavior has changed as a direct result of the Internet. People are increasingly likely to do a search for a product or service online and then either purchase it online there and then or use it later to influence their purchasing decisions once they do go offline.

A joint Google and comScore study on “The Role of Search in Consumer Buying” found that immediate online sales accounted for only 16% of activity and a further 21% of sales came online at some point later after the search. More strikingly, a
whopping 63% of sales came from activity done offline at some point after the online search was conducted. (The study was conducted in March 2006 and examined activity across 11 product categories over a 60-day period).
This holds true for business-to-business sales as well as just business-to-consumer sales. For example, in their Business to Business survey of 2007, Enquiro discovered that 36.4% of respondents found vendors online but then completed their purchase offline later. (Source: Enquiro “Business to Business Survey 2007” May 2007). So, the buying decisions of your prospects and customers are being greatly influenced online and will lead to offline sales. If you are not there to influence them online, then they’ll most likely not buy from you when they go to purchase offline later and buy
from your competitors instead.